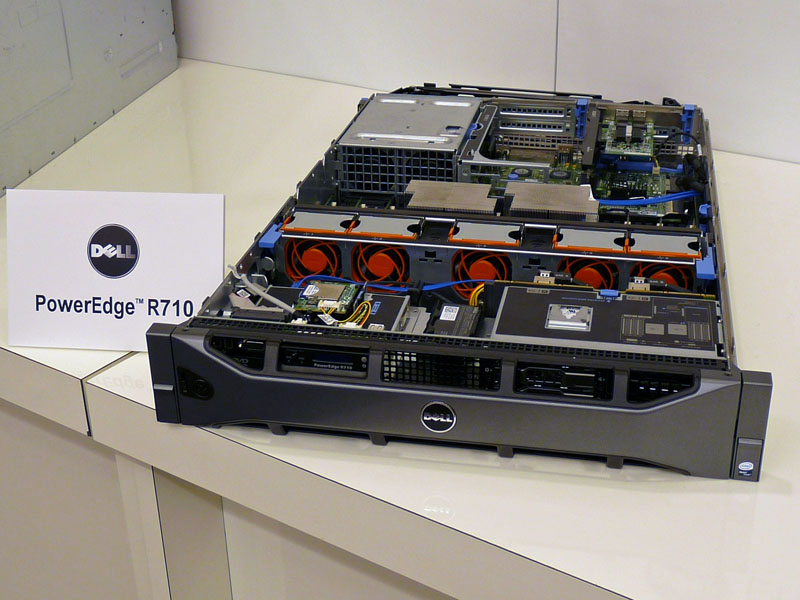 After starting couple of projects at work which involved server consolidation through virtualization, I went on a quest to transform my home lab into a virtualization lab.

Since I had a Dell Poweredge SC440 server as a domain controller along with mixture of windows 7 and windows XP Professional workstations, I decided to purchase similar dell server and a Network Attached Storage (NAS) central storage to simulate iSCSI Storage Area Network (SAN). I bought the server few weeks ago and upgraded the existing one with Intel Xeon processor, couple of Intel Gigabit ET Dual Port Server Adapters and memory, more on the specs below. I need to decide on a NAS unit as my existing NAS from Netgear (readynas NV+) would not work, nor do I want it to work as it has important data that is more important than a lab. It also would not allow me to use it as an iSCSI target. On the networking side, I’ve decided to use Cisco 3750G switches from my dismantled CCIE Lab.

There are tons of deals out there on cheap hardware that you can use to build your virtualization lab, test things out, break things by making silly mistakes to make sure you don’t make same mistakes when working in a production environment at your job or client. You CAN run virtualization hypervisors such as VMware and XenServer on any hardware but my goal is to use the lab for my “home production” environment as well as test out new operating systems and applications plus use it a way to help me train for those applications/OSes. Therefore, the need to have couple of decent servers to deploy at least 5 VMs each and test business continuity solutions such as High Availability (HA) and Fault Tolerance (FT).

Moreover, I am studying for my VCP exam certification and having hands-on training on vSphere 4.0 is extremely helpful and thats how I like to train my self.  I’ve finished reading the Mastering vSphere 4.0 book by Scott Lowe and building the lab at home as well as implementing virtualization at work using enterprise class hardware such as Dell R710s, good $20k+ SAN should help build up that confidence and expertise. Anyway, more on work project some other time but for now more details on my home lab.

To be able to test enterprise features of VMware or Citrix XenServer, it is imperative to have central storage for your virtual machines and data. I am looking at a NAS which also has iSCSI target capability to simulate an iSCSI SAN. The two that I am interested in are: Thecus N77000PRO and QNAP TS-809 PRO, N7700PRO has an additional PCI-x slot for 10GbE NIC!!! I am still working on this and need to decide which one to go with. The major factor in all this is the cost as the NAS would be around $1100+ and then add cost for hard drives. I like to buy NAS units in diskless configuration and buy hard drives cheaply on as needed basis. I do not need to start with 5, 6 or 8 hard drives, 2 1TB or 2TB HDs in RAID-1 should do the trick. That really drives down the cost of the NAS over time as you are not buying 10TB of space that you will not use in the next 2-4 years so why not buy hard drives when you need the space? No doubt that hard drive prices have come down over the past few years but think about what hard drives use to cost and what they cost now and what they will be in year from now? Try it, plan it now, put the best hard drives in your wishlist and buy them in year or so when they are at least 45% cheaper, you will save money and in the process thank virtualization.net for the advice.

My existing Netgear’s ReadyNAS is almost out of space. It has 4x 750GB hard drives, about 2TB of space in RAID-5. I’ve tried using NFS as datastore on vmware and the constant access to VMs produces too much I/O on the hard drives and when its sitting in the same room, you can literally hear the datastore being accessed. So, to be on the safe side, I’ve decided to invest in new NAS unit because if anything does go wrong, the only thing I will lose is the test/lab data and not my important stuff on netgear’s readynas.

Here is visio diagram of the basic vmware network layout: Other thoughts and Ideas
The servers have one 80GB SATA hard drives, I could install 4 hard drives each with 2 RAID-1 goups and install Citrix XenServer on that. Has anyone tried this? It should work and could turn up the notch as far as ROI is concerned on the hardware. Currently, I have one Vmware ESXi host with 3 VMs on it, including the domain controller, windows server 2008 R2 64bit with vCenter database. It would be nice to switch between two dominant hypervisors on as little hardware as possible.

One of the things we will try to do here on virtualization.net is to allow users (professionals, geeks and new) to share ideas and their network setups with others to build stronger, more stable virtualized networks. Do visit the Virtualization Forum and post your questions, answers and ideas. The registration is free.