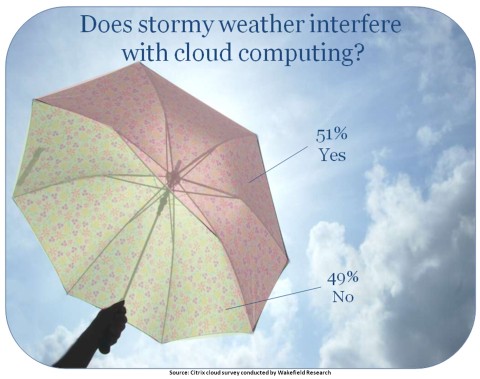 While “the cloud” may be the tech buzzword of the year, many Americans remain foggy about what the cloud really is and how it works. A new national survey by Wakefield Research, commissioned by Citrix, showed that most respondents believe the cloud is related to weather, while some referred to pillows, drugs and toilet paper. Those in the know claim working from home in their “birthday suit” is the cloud’s greatest advantage. The good news is that even those that don’t know exactly what the cloud is recognize its economic benefits and think the cloud is a catalyst for small business growth.

The survey of more than 1,000 American adults was conducted in August 2012 by Wakefield Research and shows that while the cloud is widely used, it is still misunderstood. For example, 51 percent of respondents, including a majority of Millennials, believe stormy weather can interfere with cloud computing. Nearly one third see the cloud as a thing of the future, yet 97 percent are actually using cloud services today via online shopping, banking, social networking and file sharing. Despite this confusion, three in five (59 percent) believe the “workplace of the future” will exist entirely in the cloud, which indicates people feel it’s time to figure out the cloud or risk being left behind in their professional lives.

These survey responses show there is a significant disconnect between what Americans know, what they pretend to know, and what they actually do when it comes to cloud computing. Among the key findings:

You’re not alone: While many admit they don’t understand the cloud, 56 percent of respondents say they think other people refer to cloud computing in conversation when they really don’t know what they are talking about.

What is it, anyway?: When asked what “the cloud” is, a majority responded it’s either an actual cloud (specifically a “fluffy white thing”), the sky or something related to the weather (29 percent). Only 16 percent said they think of a computer network to store, access and share data from Internet-connected devices. Some of the other verbatim responses include:

Many use it, few understand it: A majority of Americans (54 percent) claim to never use cloud computing. However, 95 percent of this group actually does use the cloud. Specifically, 65 percent bank online, 63 percent shop online, 58 percent use social networking sites such as Facebook or Twitter, 45 percent have played online games, 29 percent store photos online, 22 percent store music or videos online, and 19 percent use online file-sharing. All of these services are cloud based. Even when people don’t think they’re using the cloud, they really are.

Softer advantages, like working from home in the buff: People offered additional, unexpected benefits of the cloud, including the ability to access work information from home in their “birthday suit” (40 percent); tanning on the beach and accessing computer files at the same time (33 percent); keeping embarrassing videos off of their personal hard drive (25 percent); and sharing information with people they’d rather not interact with in person (35 percent).

Concerns include cost, security, privacy: Despite these advantages, Americans still have reasons why they limit their use of cloud computing or avoid it entirely. Among those who hardly ever or never use the cloud, the top three deterrents are cost (34 percent), security concerns (32 percent) and privacy concerns (31 percent).

“This survey clearly shows that the cloud phenomenon is taking root in our mainstream culture, yet there is still a wide gap between the perceptions and realities of cloud computing,” said Kim DeCarlis, vice president of corporate marketing at Citrix. “While significant market changes like this take time, the transition from the PC era to the cloud era is happening at a remarkable pace. The most important takeaway from this survey is that the cloud is viewed favorably by the majority of Americans, and when people learn more about the cloud they understand it can vastly improve the balance between their work and personal lives.”

Methodological Notes:
The Citrix Cloud Survey was conducted by Wakefield Research (www.wakefieldresearch.com) among 1,006 nationally representative American adults ages 18 and older, between Aug. 2-7, 2012, using an email invitation and an online survey. Quotas have been set to ensure reliable and accurate representation of the U.S. adult population 18 and older.

Results of any sample are subject to sampling variation. The magnitude of the variation is measurable and is affected by the number of interviews and the level of the percentages expressing the results. For the interviews conducted in this particular study, the chances are 95 in 100 that a survey result does not vary, plus or minus, by more than 3.1 percentage points from the result that would be obtained if interviews had been conducted with all persons in the universe represented by the sample.