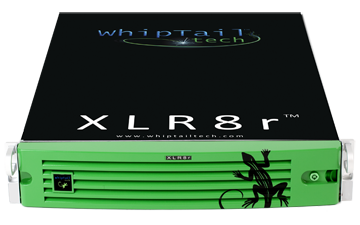 The department chose the WhipTail array because of its flexibility and versatility in supporting all storage interfaces and protocols out of the box, as well as the ease of installation and operation, and because of WhipTail’s reputation within the industry. Since implementing the WhipTail storage arrays, the System Optimization Engineering Department has seen a 50x improvement in latency and a 40 percent increase in performance.

“WhipTail’s interface flexibility is unparalleled. Other options would provide one (maybe two) interfaces or protocols; WhipTail supports them all. This factor alone simplifies things immensely; it enables us to allocate WhipTail’s performance quickly among multiple types of workloads,“ said Fred Abounader, MTS (Member of Technical Staff) Performance Systems Engineer in AMD’s System Optimization Engineering Department. “What’s also key is that the WhipTail solid-state array arrives pre-configured for performance – eliminating the need for us to do the amount of storage tuning required with our old setup and allowing us to once again be the systems engineers we’re meant to be, rather than the storage performance engineers we had become.”

AMD is a semiconductor design innovator with graphics and computing technologies that power a variety of solutions including PCs, game consoles and the servers that drive the Internet. AMD’s System Optimization Engineering Department is continuously working to improve the industry-leading performance of the AMD Opteron™ processor.

“For what we needed, we couldn’t risk going with a first Beta release product and dealing with the growing pains of a company just starting up,” said Abounader. “With WhipTail, not only does the technology perform as advertised, but it is being provided by an established company with a proven track record and a validated roadmap. Not to mention, the standalone SSD array architecture of WhipTail as opposed to other forms of SSD architectures that are becoming obsolete didn’t tie us to the outdated hard disk drive technology we were trying to leave behind. We took real comfort in both those factors.”

“Given the comprehensiveness of the interfaces and protocols we support out of the box, not only does WhipTail plug into existing environments, but it can support the growing high IO environments that enterprises are adopting over the next five years,” said Brian Feller, CMO at WhipTail. “This value is something that seems so obvious but that is often overlooked within the industry. There are companies like AMD though that recognize that value and are positioning themselves as innovators as a result.”

Codership by Galleria Cluster: Do More with Galera Cluster in Your OpenStrack Cloud