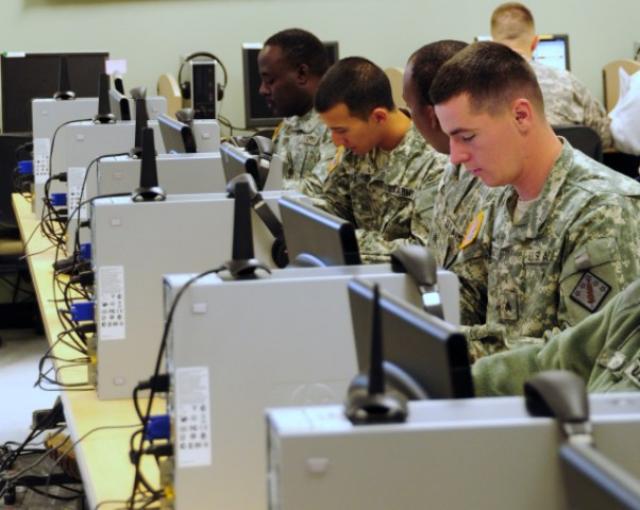 This is a significant step for several reasons.

The Army is currently a Common Access Card-enabled, Windows-based devices operating environment. That means Soldiers can’t access much of the training and education content from home or other places when they’re using non Windows-based mobile devices, said Helen A. Remily, Training and Doctrine Command’s, or TRADOC’s, capability manager for the Army Distributed Learning Program, at Joint Base Langley-Eustis, Virginia.

The commercial cloud allows them a broader capability to access content via their personally owned devices, such as Apple iOS and Android mobile devices, she added.

“Given information-technology advances, Soldiers expect the ability to access learning content regardless of the type of mobile device they own,” she said. “Today’s generation of Soldiers and leaders have a high expectation of persistent access to learning content from a reliable network, independent of their location.”

Gen. David Perkins, TRADOC commander, is behind the program.

“During the downsizing of our force, it is critical to develop our leadership effectively,” he said after assuming command in March.

Leadership development and technical training are at the heart of TRADOC’s mission, and delivering learning content to develop leadership competencies in the most efficient and effective way is critical, said Remily.

That delivery just got a whole lot better.

Remily laid out the timeline:
After conducting a 12-month proof of concept, which concluded in December 2013, TRADOC created a commercial cloud learning environment and migrated all of the non-sensitive distributed learning content for the Command and General Staff College at Fort Leavenworth, Kansas, to the commercial cloud. This has been a highly successful endeavor with approximately 5,000 students attending annually as part of their professional military education. This has also produced significant savings for the Army.

Within the next three months, the U.S. Army War College at Carlisle Barracks, Pennsylvania, will also migrate their learning content to the commercial cloud, and by the end of this calendar year, the U.S. Military Academy, West Point, New York, will also migrate content.

The future plan is for other Army schools to migrate learning content to the commercial cloud learning environment, Remily said, with discussions underway with the Army School of Music, Army Chaplain Center and School, the Defense Language Institute, and the Army Management Staff College, which oversees the Army’s civilian education system. More will follow.

Students at the Command and General Staff College have already provided very positive feedback, she noted. They value the flexibility of distributed learning and being able to use their personal mobile devices. They also like the social learning aspect of having a dotcom learning environment with peer to peer interactions through threaded discussions, blogs, etc.

Many students who previously did not have a reach-back capability to access relevant content after graduation now do, she added.

For example, Soldiers in the Individual Ready Reserve don’t have CACs. Also, foreign nationals who attend schools often receive temporary CACs, however, they must return them after graduation from Command and General Staff College and the War College. Before going to the commercial cloud, they did not have reach-back access to the content.

BALANCING SECURITY, ACCESS
Remily spent most of her 32 years government career with military intelligence and counter-terrorism fields before coming to TRADOC, so she has an abiding appreciation for information technology, known as IT, security concerns.

TRADOC “is working very closely with the [Army’s Chief Information Office] community to help design and field an Army-persistent learning capability that doesn’t compromise the network,” she said.

The Army Chief Information Office’s “primary mission is protecting the Army’s network, so they are risk-averse, as they should be,” she continued. “Many of our adversaries are tech-savvy and use technology against us as they don’t have the regulations and laws that we must follow.”

On the other hand, Remily said content should be protected only at the level that’s necessary and no more.

“There’s no need to over-protect our content as this leads to challenges with accessibility of training and education products and material. It comes down to balancing accessibility and that of security and risk mitigation,

Moving education content to the cloud is actually good news for the Chief Information Office.

“Migrating content off of the Army’s network automatically increases the operational network bandwidth because you don’t have large packets of training and education information flowing back and forth across that network,” she explained.

There’s a lot of sensitive military occupational specialty-type training that won’t go to the cloud, but in the future, it may be possible to do so as commercial cloud-computing has provisions for CAC-enabled authentication

Despite a tight budget, the future for cloud migration looks promising.

Currently, the TRADOC Project Office for Mobile Devices, which is managing the integration of mobile computing throughout TRADOC, is only temporary.

Recently, TRADOC gained approval for a permanent office to manage the effort. It will be known as TRADOC’s Capability Manager for Mobile and it will fall under the Army’s Distributed Learning Program.

The new office, she said, will address policy, governance, infrastructure and devices. More importantly it will assist us in identifying mobile content (to include mobile apps) that should migrate and better enable accessibility via personally owned mobile devices.

Because of the resource issues, “we’re re-purposing current positions” to establish the new organization, meaning no new hires.

“This is a big move for the Army,” she said. “We’ll start with TRADOC to get this right and then support other Army organizations.”