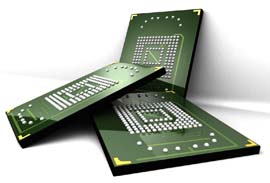 Memoir Systems was co-founded in March 2009 by Sundar Iyer (CTO) and Da Chuang (COO), and is backed by Lightspeed Venture Partners. Iyer has previous experience as co-founder and CTO of Nemo Systems, the network memory company that was acquired by Cisco Systems, and Chuang was a technical leader at Cisco. In addition, both founders have a common background in academia, as well as in founding roles in previous switching and associative memory-related startups.

In conjunction with the formal launch of the company, memory industry veteran, Adam Kablanian, has been named as CEO of Memoir Systems. Iyer and Chuang noted, “Adam’s experience and knowledge of the memory industry will play a pivotal role in the overall development of Memoir as a successful, thriving enterprise.”

Kablanian noted, “I am delighted to join the team at Memoir Systems. After spending 25 years in the memory business, I thought I had seen all the innovations that were possible in terms of how to make memories faster. After learning about Memoir’s unique technology, I realized that there are more chapters to write on memory, and I want to be part of that. Memoir’s pioneering technology ushers in the next phase of embedded memory innovation, i.e. Memory 2.0.”

Kablanian previously held numerous positions as a technology and business executive in the embedded memory industry which included serving as president and CEO (until Mar ’07), chairman (until Mar ’08), of Virage Logic; a company building embedded memories, which he co-founded and subsequently took public on NASDAQ in 2000.

Memoir Systems has pioneered a new “Algorithmic Memory Technology™,” that uses algorithms synthesized in hardware to increase the performance of existing embedded memory macros – up to 10X more MOPS. This technology is implemented as RTL-level IP, and is process, node, and foundry independent. Memoir’s solutions appear as standard embedded memories, and can be readily integrated into existing standard SoC design flow. Da Chuang, co-founder and COO, noted, “We have developed a software platform that enables us to rapidly deliver Algorithmic Memories that fit seamlessly within the SoC design flow.”

Since it’s process independent, Memoir’s technology works equally well on older as well as advanced process nodes and can be implemented into a variety of SoC implementations including, ASICs, ASSPs, GPPs and FPGAs. These devices have the most need for higher MOPS making them ideal candidates for Memoir’s performance enhancements.

Sundar Iyer, co-founder and CTO, noted, “Algorithmic Memory technology is unique in the industry. Our approach introduces a new ‘chisel’ to solve the memory-performance bottleneck at a higher level of abstraction. This is different from the traditional ‘hammer’ of only relying on performance improvements in memory circuits. Our approach complements circuit techniques, and forms a powerful way to alleviate the traditional ‘processor-memory’ gap.”

Memoir Systems, Inc. is a provider of breakthrough embedded memory technology that is delivered as Semiconductor Intellectual Property (SIP). The company utilizes its patent-pending Algorithmic Memory™ technology to increase the performance of existing memory macros – up to 10X more Memory Operations Per Second (MOPS). In addition, the technology significantly shortens memory development time, and lowers area and power consumption. Memoir’s technology is process, node, and foundry independent, and can be readily integrated into any existing SoC (ASICs, ASSPs, GPPs and FPGAs) design flow. The company’s strategy is to deliver technology and business benefits to its customers and partners by providing solutions that are drop-in replacements for existing embedded memory. Memoir Systems is based in Santa Clara, California, and has additional research and development facilities located in Hyderabad, India.