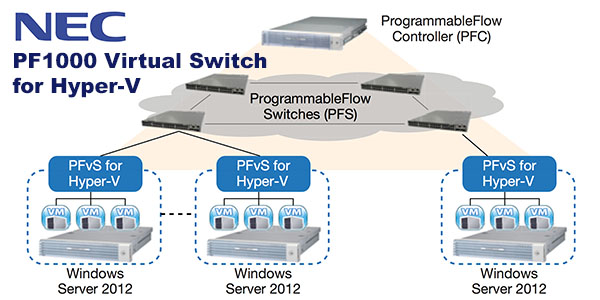 NEC’s planned SDN solution will help customers of Windows Server 2013 and Hyper-V automate the time-consuming and disruptive task of configuring their networks as they support the dynamic movement of virtual machines. It further enhances the flexibility provided with complete network virtualization, introduced with the NEC OpenFlow-based vSwitch for Windows Server 2012 Hyper-V and available since January 2013. NEC’s ProgrammableFlow vSwitch for Windows Server Hyper-V environments, the PF1000, and the ProgrammableFlow SDN Controller manage network flows, working in conjunction with System Center 2012 Virtual Machine Manager, controlling the source and destination virtual machines.

Customers will have new levels of virtual machine mobility, visibility and control as they monitor end-to-end network flows from one virtual machine to another. ProgrammableFlow SDN customers, operating in production today, have experienced operating expense reductions of as much as 50-80%.

The new, integrated orchestration will be demonstrated at TechEd in New Orleans on June 4, in the session entitled “How to Design and Configure Networking in Microsoft System Center Virtual Machine Manager and Hyper-V,” which begins at 3:15 p.m. NEC and Microsoft are open to early adopter customers now, with general availability of the technology expected this fall.

“I have been talking to customers across the country in a series of Software-Defined Networking workshops, and they are excited, but skeptical, of the benefits of SDN,” reported networking industry analyst Jim Metzler, VP of Ashton, Metzler and Associates. “NEC has repeatedly demonstrated leadership with its ProgrammableFlow network family – most recently with its SDN Application Center. Based on reports from SDN customers in production today, NEC has helped to clarify what is possible with this transformative technology.”