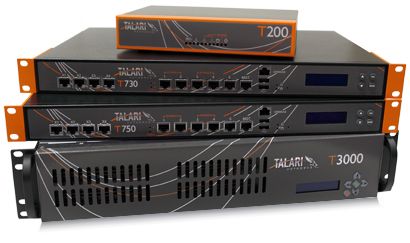 “While we were testing our geographic redundancy feature, there was a major Internet blackout in North America,” said John Dickey, vice president of Engineering at Talari Networks. “In spite of the fact that two of our service providers were taken out, the new APNware ensured that our network kept working.” The Internet outage was caused by a router bug as reported in early November 2011.

WAN Virtualization provides reliable, cost-effective support for business applications such as VoIP and virtual desktop infrastructure, allowing organizations to take advantage of the affordability of broadband without foregoing business quality, reliability or availability.

“As the market more fully embraces WAN Virtualization and the use of multiple network connections at each site, we are able to find more ways to solve real networking problems for our customers, and this maturity is now reflected in the depth of our product range,” explained Keith Morris, VP of Marketing.

The Mercury T510 appliance is available now with a suggested list price between $3,995 and $5,995 depending on configuration.