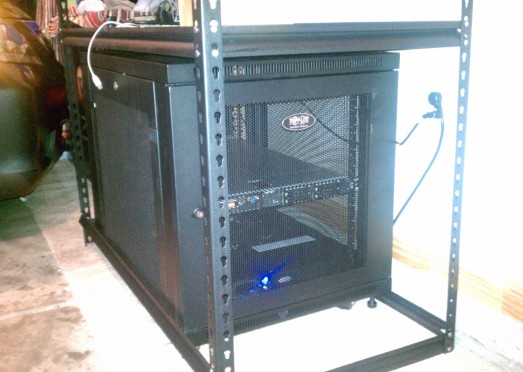 This will be part 2 of the building home virtualization lab blog I wrote couple of years ago. I haven’t had much time over the past few months to write due to a very busy work and family schedule. In addition to that, I went through a few VCP certification exams and also in that time, I’ve rebuilt my home virtualization lab aka “vNest” and “retired” the old servers.

The old dell servers, the Poweredge SC440 with Intel 3060 are great for most of the virtual labs and give you the ability to test most of the features found in VMware ESXi/vSphere but I ran into problems when the CPU would not support some of the advance features (HA, FT, etc.). The reason for going for these servers was simple, I already had one in my home network and buying another one would be cheaper and cost effective solution, hence the lab on budget. I did not bother checking if it supported FT/HA or clustering. There were limitations on the amount of RAM the servers supported so that also did not allow more than 5-6 VMs to work efficiently. You could power on as many VMs as possible but its another thing to work with them…

I decided to upgrade and go with Dell Poweredge 1950 Gen III servers. Here are the specs for the two servers:

The price was the main factor which made me go for those specs and servers. Both servers, as configured, with quad port NICs were less than $2,000. I really wanted to buy the R610 or HP Prolinant DL360 G7 but they were just too expensive. The vNEST is running VMware vSphere 5.0. With these servers, I can power on 10, 15, 20 VMs each and the servers hardly notice. I have multiple exchange deployments running, SQL 2008 R2, Ubuntu, vCenter, multiple Active Directory labs in addition to what I use for home computers, a couple of ESXi 4.1 servers in VMs to simulate vSphere 4 setup and VDI in a box with a few windows 7 virtual machines.

I’ve worked with these servers at the data center, office but in home setup, they could be very noisy. And since they are rack mountable, make sure you get rack which supports servers more than 32″ inches in length. I decided to place the lab in my garage, here is picture from the early stages:

There is plenty of room to get in the back and sit if you want to mess with the cables, etc. As of now, both servers are in the rack with the same networking with Cisco 3750G switches. I took out Cisco ASA 5505 and deployed a Cisco 1841 router as ASA had limit on number of VLANs which can be routed. The vNest uses the NAS I had in the older lab, the Thecus N7700PRO for datastores and iSCSI Storage. I haven’t had any issues with the NAS yet. If you work with a NAS/SAN vendor, we are interested in doing reviews for your units. Please contact us.

For power, I am using two UPS units (just one is rack mounted as seen above, other is desktop version), and a powerstrip in the back of the rack.

For rack,  I went with the Tripp Lite 12U Rack Enclosure Server Cabinet 33-Inch Deep with Doors and Sides from Amazon (price has gone up significantly from the time I ordered for around $460), new, delivered at my home, FREE!!! It is an excellent rack, the doors on the side really help me reach inside of the rack without having to move it around.

I hope to use this lab for next few years to write tutorials and test out new virtualization software technologies. If you have any questions or comments, feel free to post in Virtualization.net’s Forums.